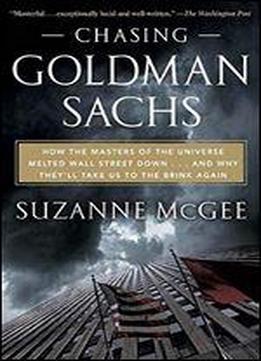 Chasing Goldman Sachs: How The Masters Of The Universe Melted Wall Street Down...and Why They'll Take Us To The Brink Again
by Suzanne McGee / 2011 / English / EPUB

You knowwhathappened during the financial crisis now it is time to understandwhythe financial system came so close to falling over the edge of the abyss andwhyit could happen again.Wall Street has been saved, but it hasnt been reformed. What is the problem? Suzanne McGee provides a penetrating look at the forces that transformed Wall Street from its traditional role as a capital-generating and economy-boosting engine into a behemoth operating with only its own short-term interests in mind and with reckless disregard for the broader financial system and those who relied on that system for their well being and prosperity. Primary among these influences was Goldman Sachs envy: the self-delusion on the part of Richard Fuld of Lehman Brothers, Stanley ONeil of Merrill Lynch, and other power brokers (egged on by their shareholders) that taking more risk would enable their companies to make evenmoremoney than Goldman Sachs. That hubrisand that narrow-minded focus on maximizing their short-term profitsled them to take extraordinary risks that they couldnt manage and that later severely damaged, and in some cases destroyed, their businesses, wreaking havoc on the nations economy and millions of 401(k)s in the process. In a world that boasted more hedge funds than Taco Bell outlets, McGee demonstrates how it became ever harder for Wall Street to fulfill its function as the financial systems version of a power grid, with capital, rather than electricity, flowing through it. But just as a power grid can be strained beyond its capacity, so too can a financial grid collapse if its functions are distorted, as happened with Wall Street as it became increasingly self-serving and motivated solely by short-term profits. Through probing analysis, meticulous research, and dozens of interviews with the bankers, traders, research analysts, and investment managers who have been on the front lines of financial booms and busts, McGee provides a practical understanding of our financial utility, and how it touches everyone directly as an investor and indirectly through the powercapitalthat makes the economy work. Wall Street is as important to the economy and the overall functioning of our society as our electric and water utilities. But it doesnt act that way. The financial system has been saved from destruction but as long as the mind-set of chasing Goldman Sachs lingers, it will not have been reformed. As banking undergoes its biggest transformation since the 1929 crash and the Great Depression, McGee shows where it stands today and points to where it needs to go next, examining the future of those financial institutions supposedly too big to fail. From the Hardcover edition.