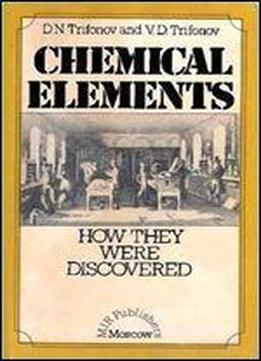 Chemical Elements: How They Were Discovered
by D. N. Trifonov / 1986 / English / PDF

All chemical compounds that constitute living and inorganic matter are diverse combinations of eighty-odd elements. The remaining known elements are practically not found in nature. Scientists created them artificially by means of nuclear reactions. More new elements can be obtained in this manner and we do not know how many of them. But it is quite clear that the chemical alphabet is not complete yet. This book describes how the alphabet of chemistry has been designed and how the inquisitive mind of the researchers discovered new chemical elements, one after another. CONTENTS Notice to the reader 9 Introduction 11 Part One - Elements Discovered in Nature Chapter 1 Elements Known in Antiquity Chapter 2 Elements Discovered in the Middle Ages Chapter 3 Elements of Air and Water. Chapter 4 Elements Discovered by Chemical Analysis Chapter 5 Elements Discovered by the Electrochemical Method Chapter 6 Elements Discovered by the Spectroscopic Method Chapter 7 Rare Earths Chapter 8 Helium and Other Inert Gases Chapter 9 Elements Predicted from the Periodic System Chapter 10 Two Stable Elements Which Were the Last to Be Discovered Chapter 11 Radioactive Elements Part Two - Synthesized Elements Chapter 12 Discoveries of Synthesized Elements Within the Old Boundaries of the Periodic System Chapter 13 Transuranium Elements Conclusion 252