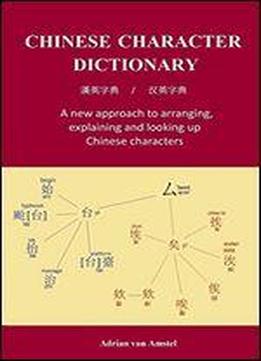 Do you often have difficulty finding a particular character in a standard Chinese dictionary? Do you often fail to remember characters, though you have seen and looked them up several times? Don't you think one of the reasons could be that characters that look similar to others are not grouped together? And don't you think that the etymological background of characters (their historical development) could and should be explained better in order to understand the reason for all those dots and strokes? If your answer to these questions is 'yes', then help could be on its way within seconds. The Chinese Character Dictionary contains several new features that make looking up, learning and remembering Chinese characters more effective and more fun:* characters are arranged by the phonetic part that in most characters is relatively easy to distinguish. By grouping characters that have the same phonetic into series, it is now possible to study and compare characters that look almost similar * any character can be found by stripping it first of its radicals, and then splitting the remaining phonetic into components. Phonetic and character can then be found under one of these components * about 7,450 traditional and 1,450 simplified character shapes can be found using the same 3-step method. Examples are given of their usage in daily or literary Chinese, and many pinyin transliterations are given * counting strokes is not necessary, and most characters can be found within seconds * etymological explanations are included, which can help people to understand the historical background of phonetics and characters, moreover, they are very effective with helping to remember them and distinguishing them from others that look similar * a 30-page introduction is included, in which the method used for looking up characters is explained step by step, and with many examples. It also explains how to distinguish radicals, besides explaining different kinds of radicals. Moreover, the introduction contains a brief overview of the historical development of Chinese characters in general.The Chinese Character Dictionary is meant for people who use traditional and/or simplified texts no matter whether the character you are looking for is a simplified or traditional one, both can be found just as conveniently with the same method. The Chinese Character Dictionary can also be used by people who do not plan to study Chinese on a regular basis, but are interested in learning about Chinese characters, their history, and ancient Chinese culture. For example, the etymological description of the character for "wife" will inform you that it is composed of two pictographs, one for that of a woman, and the other depicting a hand holding a broom. These and other etymological descriptions are very insightful for understanding ancient Chinese culture.For students of Chinese who are in the beginning years of their study and are using simplified characters, an alternative version of the CCD is available. The Simplified Chinese Character Dictionary is based on the Chinese Character Dictionary, but differs from the latter in that it only contains simplified character entries. Another difference is that the example words and phrases in the simplified CCD are entirely in simplified Chinese, while in the CCD these are primarily in traditional Chinese.