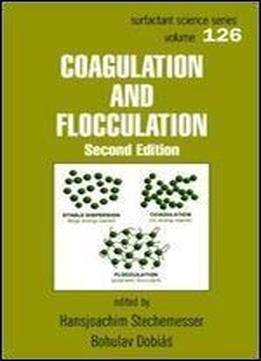 First published in 1993, Coagulation and Flocculation is a practical reference for the researchers in the field of the stabilization and destabilization of fine solid dispersions. By omitting chapters that remained unchanged from the first edition, the editors of this second edition completely update, rewrite, and expand upon all chapters to reflect a decade of the latest advances in both theoretical and application aspects of the field. The authors provide expanded material that includes dissociation from a solid surface with independent sites improvements to the Gouy-Chapman model electrical double layer, surface ionization, and surface heterogeneity thin liquid films and modeling of a semi-batch process using microprocesses probabilities and clay mineral intracrystalline reactions, applications, and gelation. New chapters cover homopolymers and their effect on colloid stability, including never before published figures and equations the stability of suspensions in the presence of surfactants, polymers, and mixtures and the flocculation and dewatering of fine-particle suspensions, emphasizing floc formation, growth, structure, and applications. The second edition of Coagulation and Flocculation effectively captures both the theoretical and application aspects of the latest advances in the evolving field of solid dispersions, suspensions, and mixtures