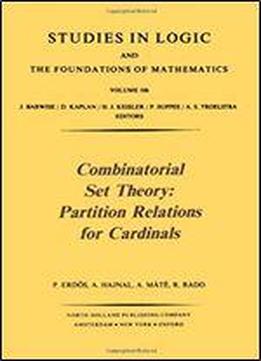 This work presents the most important combinatorial ideas in partition calculus and discusses ordinary partition relations for cardinals without the assumption of the generalized continuum hypothesis. A separate section of the book describes the main partition symbols scattered in the literature. A chapter on the applications of the combinatorial methods in partition calculus includes a section on topology with Arhangel'skii's famous result that a first countable compact Hausdorff space has cardinality, at most continuum. Several sections on set mappings are included as well as an account of recent inequalities for cardinal powers that were obtained in the wake of Silver's breakthrough result saying that the continuum hypothesis can not first fail at a singular cardinal of uncountable cofinality.