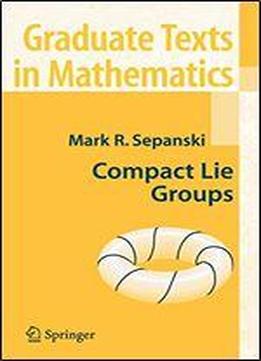 Blending algebra, analysis, and topology, the study of compact Lie groups is one of the most beautiful areas of mathematics and a key stepping stone to the theory of general Lie groups. Assuming no prior knowledge of Lie groups, this book covers the structure and representation theory of compact Lie groups. Coverage includes the construction of the Spin groups, Schur Orthogonality, the Peter-Weyl Theorem, the Plancherel Theorem, the Maximal Torus Theorem, the Commutator Theorem, the Weyl Integration and Character Formulas, the Highest Weight Classification, and the Borel-Weil Theorem. The book develops the necessary Lie algebra theory with a streamlined approach focusing on linear Lie groups.