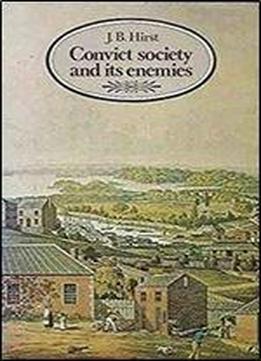 Probably more people have read Robert Hughes' "Beyond the Fatal Shore" which focuses on the horrors of such places as Norfolk Island and Port Arthur where only the most incorrigible convicts were sent. But it is John Hirst's "Convict Sociery and its Enemies" that gives us the truest picture of convict life and tells us that convict NSW was a long way from being anything like a slave state. Convicts, except for the most incorrigible repeat offendors, had considerable freedom of movement,opportunities for economic and social advancement, and the full rights of citizens of the crown. NSW became a free society without any "slave rebellion" or revolution because it had never been anything but a free society albeit one that employed convict labour. When transportation ended in 1840 that was the end of convict NSW. The process was smooth, bloodless and built upon the liberties already in place under the British crown. Of course the perceived "convict stain" still clung for a long time to Australians' own self identity, though now to trace one's ancestry to a convict is more a badge of honour than a mark of shame.