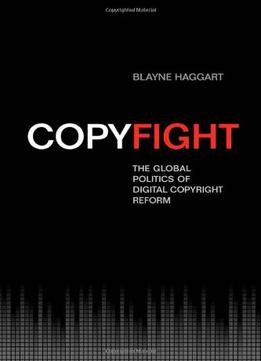 Widespread file sharing has led content industries – publishers and distributors of books, music, films, and software – to view their customers as growing threats to their survival. Content providers and their allies, especially the U.S. government, have pushed for stronger global copyright policies through international treaties and domestic copyright reforms. Internet companies, individuals, and public-interest groups have pushed back, with massive street protests in Europe and online “internet blackouts” that derailed the 2012 U.S. Stop Online Piracy Act (SOPA). But can citizens or smaller countries really stand in the way of the U.S. copyright juggernaut? To answer this question, Copyfight examines the 1996 World Intellectual Property Organization internet treaties that began the current digital copyright regime. Blayne Haggart follows the WIPO treaties from negotiation to implementation from the perspective of three countries: the United States, Canada, and Mexico. Using extensive interviews with policymakers and experts in these three countries, Haggart argues that not all the power is in the hands of the U.S. government. Small countries can still set their own course on copyright legislation, while growing public interest in copyright issues means that even the United States might move away from ever-increasing copyright protection.