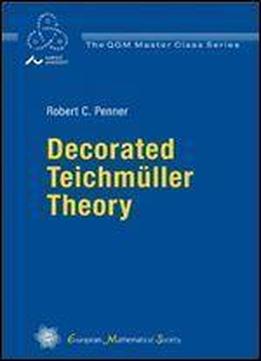 There is an essentially “tinker-toy” model of a trivial bundle over the classical Teichmuller space of a punctured surface, called the decorated Teichmuller space, where the fiber over a point is the space of all tuples of horocycles, one about each puncture. This model leads to an extension of the classical mapping class groups called the Ptolemy groupoids and to certain matrix models solving related enumerative problems, each of which has proved useful both in mathematics and in theoretical physics. These spaces enjoy several related parametrizations leading to a rich and intricate algebro-geometric structure tied to the already elaborate combinatorial structure of the tinker-toy model. Indeed, the natural coordinates give the prototypical examples not only of cluster algebras but also of tropicalization. This interplay of combinatorics and coordinates admits further manifestations, for example, in a Lie theory for homeomorphisms of the circle, in the geometry underlying the Gauss product, in profinite and pronilpotent geometry, in the combinatorics underlying conformal and topological quantum field theories, and in the geometry and combinatorics of macromolecules. This volume gives the story and wider context of these decorated Teichmuller spaces as developed by the author over the last two decades in a series of papers, some of them in collaboration. Sometimes correcting errors or typos, sometimes simplifying proofs and sometimes articulating more general formulations than the original research papers, this volume is self-contained and requires little formal background. Based on a master’s course at Aarhus University, it gives the first treatment of these works in monographic form.