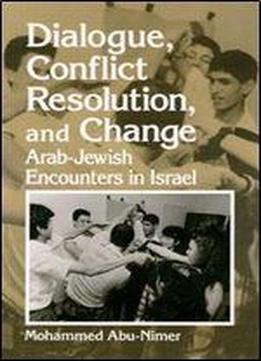 This is the first study to introduce the subject of Arab-Jewish relations and encounters in Israel from both conflict resolution and educational perspectives. Through a critical examination of Arab and Jewish encounter programs in Israel, the book reviews conflict resolution and intergroup theories and processes which are utilized in dealing with ethnic conflicts and offers a detailed presentation of intervention models applied by various encounter programs to promote dialogue, education for peace, and democracy between Arabs and Jews in Israel. The author investigates how encounter designs and processes can become part of a control system used by the dominant governmental majority's institutes to maintain the status quo and reinforce political taboos. Also discussed are the different conflict perceptions held by Arabs and Jews, the relationship between those perceptions, and both sides' expectations of the encounters. Abu-Nimer explores the impact of the political context (Intifada, Gulf War, and peace process) on the intervention design and process of those encounter groups, and contains a list of recommendations and guidelines to consider when designing and conducting encounters between ethnic groups. He reveals and explains why the Arab and Jewish encounter participants and leaders have different criteria of their encounter's success and failure. The study is also applicable to dialogue and coexistence programs and conflict resolution initiatives in other ethnically divided societies, such as South Africa, Northern Ireland, Bosnia, and Sri Lanka, where the minority and majority have struggled to find peaceful ways to coexist.