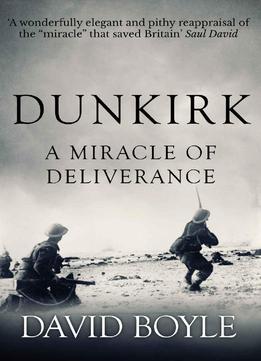 Dunkirk: A Miracle Of Deliverance
by David Boyle / 2017 / English / MOBI

In May 1940, World War II hung in the balance. As the Germans closed in on the Allies, trapping them on the beaches of Dunkirk, it seemed the entire British army would be obliterated.

Such a loss would almost certainly force the British to surrender and allow a Nazi invasion of the UK.

Vice Admiral Bertram Ramsay planned a mass evacuation across the English Channel, but with the Germans drawing ever closer and intense air raids from the Luftwaffe, escape seemed all but impossible.

But with a combination of excellent planning, luck, and an almost inconceivable bit of help from none other than Adolf Hitler himself, Operation Dynamo was underway.

Over 900 boats sailed to Dunkirk - including destroyers, ferries, fishing boats and the famous “little boats of Dunkirk” – and, across nine tense days, rescued 338,226 soldiers from the beaches of Dunkirk in what remains the biggest evacuation in military history.

This brilliantly researched book by historian David Boyle recounts each fraught day of the famous rescue mission that Winston Churchill famously called a ‘miracle of deliverance’.