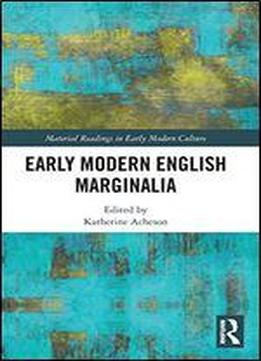 Marginalia in early modern and medieval texts printed, handwrit- ten, drawn, scratched, colored, and pasted in offer a glimpse of how people, as individuals and in groups, interacted with books and manu- scripts over often lengthy periods of time. The chapters in this volume build on earlier scholarship that established marginalia as an intellec- tual method (Grafton and Jardine), as records of reading motivated by cultural, social, theological, and personal inclinations (Brayman [Hackel] and Orgel), and as practices inspired by material affordances particular to the book and the pen (Fleming and Sherman). They further the study of the practices of marginalia as a mode a set of ways in which material opportunities and practices overlap with intellectual, social, and personal motivations to make meaning in the world. They introduce us to a set of idiosyncratic examples such as the trace marks of objects left in books, deliberately or by accident cut-and-pasted additions to printed volumes a marriage depicted through shared book ownership. They reveal to us in case studies the unique value of mar- ginalia as evidence of phenomena as important and diverse as religious change, authorial self-invention, and the history of the literary canon. The chapters of this book go beyond the case study, however, and raise broad historical, cultural, and theoretical questions about the strange, marvelous, metamorphic thing we call the book, and the equally mul- tiplicitous, eccentric, and inscrutable beings who accompany them through history: readers and writers.