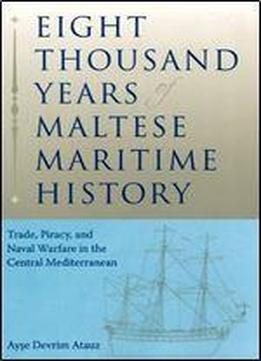 For millennia, Malta has always been considered a site of strategic importance. From the arrival of the Phoenicians through rule under Carthage, Rome, Sicilian Arabs, Normans, and Genovese, to the Order of St. John ("Knights of Malta"), the advent of the Napoleonic Wars, and even World Wars I and II, the Maltese islands have served as re-provisioning stations, military bases, and refuges for pirates and privateers. Building on her systematic underwater archaeological survey of the Maltese archipelago, Ayse Atauz presents a sweeping, groundbreaking, interdisciplinary approach to maritime history in the Mediterranean. Offering a general overview of essential facts, including geographical and oceanographic factors that would have affected the navigation of historic ships, major relevant historical texts and documents, the logistical possibilities of ancient ship design, a detailed study of sea currents and wind patterns, and especially the archaeological remains (or scarcity thereof) around the Maltese maritime perimeter, she builds a convincing argument that Malta mattered far less in maritime history than has been previously asserted. Atauz's conclusions are of great importance to the history of Malta and of the Mediterranean in general, and her archaeological discoveries about ships are a major contribution to the history of shipbuilding and naval architecture.