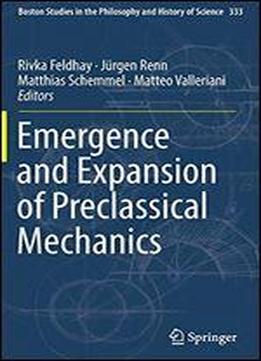 This book is divided into two sections. The first section is concerned with the emergence and expansion of a form of mechanical knowledge defined by us as pre-classical mechanics. The definition purports to the period roughly between the 15th and the 17th century, before classical mechanics was formulated as a coherent and comprehensive mechanical theory in the sequel of Newton's work. The investigation of problems that were isolated from each other at the time but cohered into some kind of stable broad intellectual framework characterizes pre-classical mechanics. The second section is dedicated to specific case studies that present the application of a pre-classical framework to determined problems and to the investigation of specific natural phenomena. It consists of five case studies that illustrate in detail a reconstruction of pre-classical mechanics in particular constellations. Early modern theoretical, technical and social contexts transformed ancient and medieval mechanical knowledge in the course of its transmission.