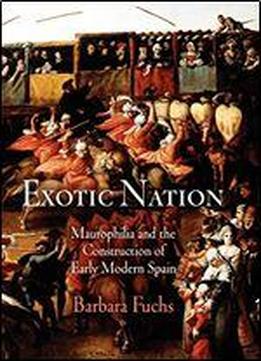 In the Western imagination, Spain often evokes the colorful culture of al-Andalus, the Iberian region once ruled by Muslims. Tourist brochures inviting visitors to sunny and romantic Andalusia, home of the ingenious gardens and intricate arabesques of Granada's Alhambra Palace, are not the first texts to trade on Spain's relationship to its Moorish past. Despite the fall of Granada to the Catholic Monarchs in 1492 and the subsequent repression of Islam in Spain, Moorish civilization continued to influence both the reality and the perception of the Christian nation that emerged in place of al-Andalus. In Exotic Nation, Barbara Fuchs explores the paradoxes in the cultural construction of Spain in relation to its Moorish heritage through an analysis of Spanish literature, costume, language, architecture, and chivalric practices. Between 1492 and the expulsion of the Moriscos (Muslims forcibly converted to Christianity) in 1609, Spain attempted to come to terms with its own Moorishness by simultaneously repressing Muslim subjects and appropriating their rich cultural heritage. Fuchs examines the explicit romanticization of the Moors in Spanish literatureoften referred to as "literary maurophilia"and the complex, often silent presence of Moorish forms in Spanish material culture. The extensive hybridization of Iberian culture suggests that the sympathetic depiction of Moors in the literature of the period does not trade in exoticism but instead reminded Spaniards of the place of Moors and their descendants within Spain. Meanwhile, observers from outside Spain recognized its cultural debt to al-Andalus, often deliberately casting Spain as the exotic racial other of Europe.