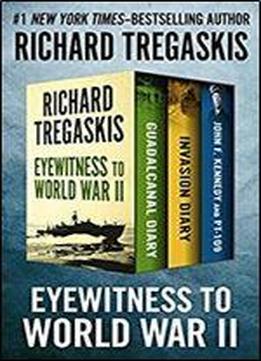 Three classic accounts of WWII from a reporter who “shaped America’s understanding of the war, and influenced every account that came after” (Mark Bowden). Volunteer combat correspondent Richard Tregaskis risked life and limb to give American readers a soldier’s–eye view of the Second World War. These three tales of bravery and sacrifice shed light on the Greatest Generation’s darkest hours. Guadalcanal Diary: In August 1942, Tregaskis landed with the US Marines on Tulagi and Guadalcanal Islands in the South Pacific for the first major Allied offensive against Japanese forces. He details the first two months of the campaign and describes the courage and camaraderie of young marines who prepared for battle knowing that one in four of them wouldn’t make it home. An instant #1 New York Times bestseller and the basis for a popular film of the same name, Guadalcanal Diary is a masterpiece of war journalism that “captures the spirit of men in battle” (John Toland). Invasion Diary: In July 1943, Tregaskis joined the Allied forces in Sicily and Italy and documented some of the fiercest fighting of the war, from bombing runs over Rome to the defense of the Salerno beachhead against heavy artillery fire to the fall of Naples. In compelling and evocative prose, Tregaskis depicts the terror and excitement of life on the front lines and his own harrowing brush with death when a chunk of German shrapnel pierced his helmet and shattered his skull. Invasion Diary is “required reading for all who want to know how armies fight” (Library Journal). John F. Kennedy and PT-109: In the early morning hours of August 2, 1943, the Japanese destroyer Amagiri sliced into US Navy motor torpedo boat PT-109 near the Solomon Islands. Ten surviving crewmembers and their young skipper, Lt. John F. Kennedy, clung to the wreckage. Over the next three days, the privileged son of a Boston multimillionaire displayed extraordinary courage and leadership as he risked his life to shepherd his crew to safety and coordinate a daring rescue mission deep in enemy territory. Lieutenant Kennedy earned a Navy and Marine Corps Medal and a Purple Heart, and the story of PT-109 captured the public’s imagination and helped propel Kennedy all the way to the White House. Acclaimed war correspondent Tregaskis—who once beat out the future president for a spot on the Harvard University swim team—brings this remarkable chapter in American history to vivid life.