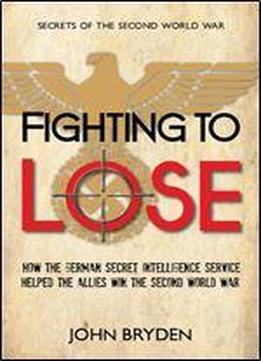 Startling new revelations about collaboration between the Allies and the German Secret Service. Based on extensive primary source research, John Brydens Fighting to Lose presents compelling evidence that the German intelligence service the Abwehr undertook to rescue Britain from certain defeat in 1941. Recently opened secret intelligence files indicate that the famed British double-cross or double-agent system was in fact a German triple-cross system. These files also reveal that British intelligence secretly appealed to the Abwehr for help during the war, and that the Abwehrs chief, Admiral Canaris, responded by providing Churchill with the ammunition needed in order to persuade Roosevelt to lure the Japanese into attacking Pearl Harbor. These findings and others like them make John Brydens Fighting to Lose one of the most fascinating books about World War II to be published for many years.