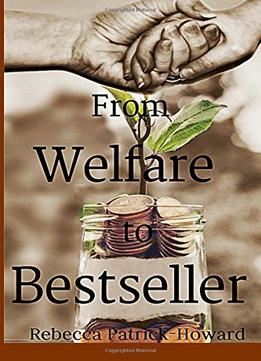 From Welfare To Bestseller: A True Story
by Rebecca Patrick-Howard / 2016 / English / EPUB

Rebecca Patrick-Howard and her family were living an enviable life: the All-American family living in one of the nicest houses in town, working good jobs, and enjoying their beautiful children. She was finally following her dream of becoming a writer and things had never looked better for the young family. She and her husband had no idea that a year later they'd be burying their youngest son. What followed was a nightmare. Suddenly, they found themselves struggling not only emotionally, but financially and physically. And, despite their best intentions and hard work, through a series of more unfortunate events that included job loss and illness, they found themselves in the one place nobody wants to be–the cold, unfriendly, metal chairs of the welfare office. Over the next few years they'd battle the shame, humiliation, and stigma of being in "the system", while still trying to deal with their individual grief, depression, and continuous financial setbacks. It's a situation many Americans find themselves in, and one that few want to talk about. Then came the ghosts. FROM WELFARE TO BESTSELLER chronicles the events that led Rebecca's family from the American dream to living on welfare and how, through a combination of hard work, ingenuity, and a little bit of luck, she became one of of the top-selling paranormal authors on Amazon. Through child loss, brain surgery, job losses, mental illness, and isolation Rebecca and her husband set lofty goals, determined to create a home-based business and use her books to pull themselves out of the hole they felt trapped in. When you've hit rock bottom, after all, the only way to go is up. In this extremely personal narrative that's part inspirational memoir, part self-help guidebook, Rebecca shares her story of how she fell to the bottom of the hole, what she did to finally reach the top, and the stumbling blocks she encountered along the way.