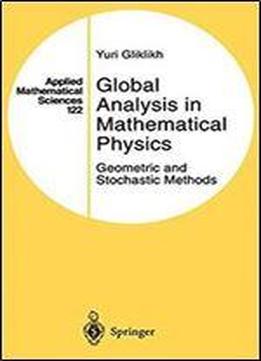 The first edition of this book entitled Analysis on Riemannian Manifolds and Some Problems of Mathematical Physics was published by Voronezh Univer­ sity Press in 1989. For its English edition, the book has been substantially revised and expanded. In particular, new material has been added to Sections 19 and 20. I am grateful to Viktor L. Ginzburg for his hard work on the transla­ tion and for writing Appendix F, and to Tomasz Zastawniak for his numerous suggestions. My special thanks go to the referee for his valuable remarks on the theory of stochastic processes. Finally, I would like to acknowledge the support of the AMS fSU Aid Fund and the International Science Foundation (Grant NZBOOO), which made possible my work on some of the new results included in the English edition of the book. Voronezh, Russia Yuri Gliklikh September, 1995 Preface to the Russian Edition The present book is apparently the first in monographic literature in which a common treatment is given to three areas of global analysis previously consid­ ered quite distant from each other, namely, differential geometry and classical mechanics, stochastic differential geometry and statistical and quantum me­ chanics, and infinite-dimensional differential geometry of groups of diffeomor­ phisms and hydrodynamics. The unification of these topics under the cover of one book appears, however, quite natural, since the exposition is based on a geometrically invariant form of the Newton equation and its analogs taken as a fundamental law of motion.