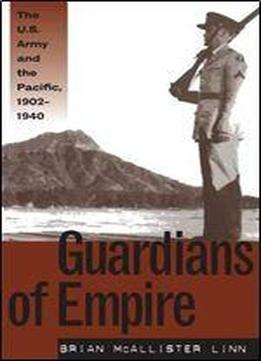 In a comprehensive study of four decades of military policy, Brian McAllister Linn offers the first detailed history of the U.S. Army in Hawaii and the Philippines between 1902 and 1940. Most accounts focus on the months preceding the Japanese attack on Pearl Harbor. By examining the years prior to the outbreak of war, Linn provides a new perspective on the complex evolution of events in the Pacific. Exhaustively researched, Guardians of Empire traces the development of U.S. defense policy in the region, concentrating on strategy, tactics, internal security, relations with local communities, and military technology. Linn challenges earlier studies which argue that army officers either ignored or denigrated the Japanese threat and remained unprepared for war. He demonstrates instead that from 1907 onward military commanders in both Washington and the Pacific were vividly aware of the danger, that they developed a series of plans to avert it, and that they in fact identified_even if they could not solve_many of the problems that would become tragically apparent on 7 December 1941.