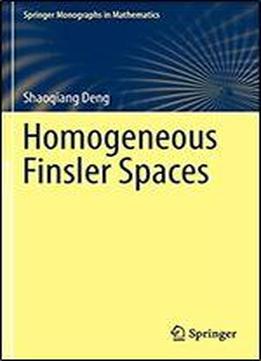 Homogeneous Finsler Spaces is the first book to emphasize the relationship between Lie groups and Finsler geometry, and the first to show the validity in using Lie theory for the study of Finsler geometry problems. This book contains a series of new results obtained by the author and collaborators during the last decade. The topic of Finsler geometry has developed rapidly in recent years. One of the main reasons for its surge in development is its use in many scientific fields, such as general relativity, mathematical biology, and phycology (study of algae). This monograph introduces the most recent developments in the study of Lie groups and homogeneous Finsler spaces, leading the reader to directions for further development. The book contains many interesting results such as a Finslerian version of the Myers-Steenrod Theorem, the existence theorem for invariant non-Riemannian Finsler metrics on coset spaces, the Berwaldian characterization of globally symmetric Finsler spaces, the construction of examples of reversible non-Berwaldian Finsler spaces with vanishing S-curvature, and a classification of homogeneous Randers spaces with isotropic S-curvature and positive flag curvature. Readers with some background in Lie theory or differential geometry can quickly begin studying problems concerning Lie groups and Finsler geometry.?