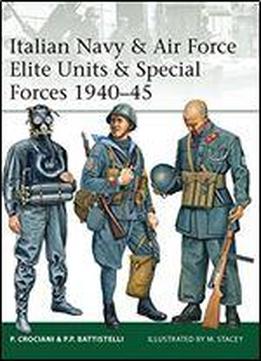 This volume assesses the formidable special forces fielded by Italy's navy and air force in World War II, both before and after Italy's surrender in September 1943. The Italian Navy special forces were particularly active and respected in the Mediterranean, where 10th Motor-Torpedo Boat Flotilla (Xa MAS) used frogmen, 'two-man torpedoes' and explosive ram-boats Italian midget submarines were also deployed against the Soviet Navy in the Black Sea. After September 1943 the Germans allowed the expansion of Count Borghese's Xa MAS, which continued fighting on their side at sea and on land, most notoriously in anti-partisan operations. The marines of the 'San Marco' Regiment fought hard in North Africa, earning the respect of their opponents and the German general Hans-Jrgen von Arnim, who described them as the best soldiers he had ever commanded they also gave birth to a paratroop-frogman section. The Italian Air Force formed a special commando unit, ADRA (Arditi Distruttori Regia Aeronautica), before the 1943 surrender it was tasked with attacking Allied airfields and communications in North Africa alongside the 'Loretto' Battalion, which was made up of ground crew trained to operate captured enemy airfields. Men from ADRA and diehard Army paratroopers formed the new 'Folgore' Regiment, which also continued to fight alongside German forces until 1945. In both cases, the pro-Allied Italian forces also formed 'mirror' units to fight alongside US and British forces, including the Recce Squadron 'F', the first Italian military unit to take up arms against the Germans occupying their country, and the Mariassalto, made up of personnel from Xa MAS who fought alongside British Royal Navy special units. Featuring rare photographs and specially commissioned artwork, this book tells the story of the little-known elite forces fielded by Italy's navy and air force in World War II, some of whose successors remain in service with today's Italian armed forces.