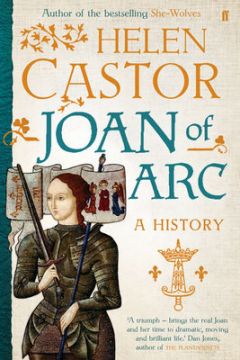 The acclaimed historian Helen Castor—bestselling author and BBC broadcaster of She-Wolves, the story of England's queens before Elizabeth I—returns with the incredible story of Joan of Arc, as only a biographer of Castor's enormous talents can tell it. Helen Castor brings us afresh a gripping life of Joan of Arc. Instead of the icon, she gives us a living, breathing young woman, a roaring girl fighting the English and taking sides in a bloody civil war that was tearing apart fifteenth-century France. Here is a portrait of a nineteen-year-old peasant who hears voices from God; a teenager transformed into a warrior, leading an army to victory in an age that believed women should not fight. And it is also the story behind the myth we all know, a myth that began to take hold at her trial: that of the Maid of Orleans, the savior of France, a young woman burned at the stake as a heretic, a woman who, five hundred years later, would be declared a saint. Joan and her world are brought vividly to life in this startling new take on the medieval world. Castor brings us to the heart of the action, to a woman and a country in turmoil, a world where no one, not Joan herself or the people around her—princes, bishops, soldiers, or peasants—knew what would happen next. Adding complexity, depth, and fresh insight into Joan's life, showing her confronting the challenges of faith and doubt in a superstitious age, Castor's Joan of Arc is a rich history and biography that allows us to better understand this remarkable woman and her world.