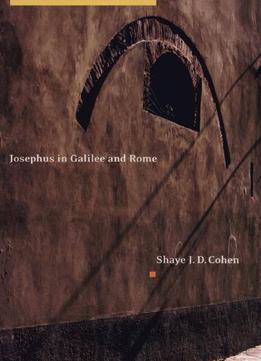 Josephus In Galilee And Rome: His Vita And Development As A Historian
by Shaye J. D. Cohen / 2015 / English / PDF

Josephus, a Palestinian Jew, authored "Bellum Judaicum", which chronicled the Jewish revolt against Rome begun in 66 AD in Jerusalem, and roughly 20 years later wrote "Antiquitates Judaicae", a study of Jewish history from the creation to 66 AD. In both "Bellum Judaicum" and the "Vita", an appendix to "Antiquitates Judaicae", Josephus deals with his own rule in the war. Although both works have apologetic aims, Josephus changes his story from one work to the next. By viewing these two works in the greater context of Josephus's life and not in isolation from one another, Shaye J.D. Cohen traces Josephus's development as a historian, as an apologist, and as a Jew. Cohen bases historical reconstruction of Josephus's participation in the war on a delineation of specific contradictions between the two works, a survey of the scholarship on the subject, a discussion of the literary relationship between the two documents, an investigation of how Josephus treated his sources, and a detailed analysis of both the "Bellum Judaicum" and the "Vita".