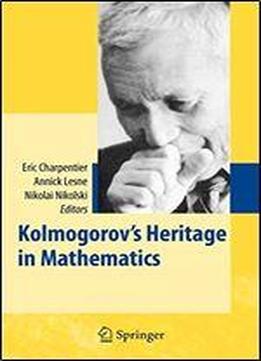 A.N. Kolmogorov (b. Tambov 1903, d. Moscow 1987) was one of the most brilliant mathematicians that the world has ever known. Incredibly deep and creative, he was able to approach each subject with a completely new point of view: in a few magnificent pages, which are models of shrewdness and imagination, and which astounded his contemporaries, he changed drastically the landscape of the subject. Most mathematicians prove what they can, Kolmogorov was of those who prove what they want. For this book several world experts were asked to present one part of the mathematical heritage left to us by Kolmogorov. Each chapter treats one of Kolmogorov's research themes, or a subject that was invented as a consequence of his discoveries. His contributions are presented, his methods, the perspectives he opened to us, the way in which this research has evolved up to now, along with examples of recent applications and a presentation of the current prospects. This book can be read by anyone with a master's (even a bachelor's) degree in mathematics, computer science or physics, or more generally by anyone who likes mathematical ideas. Rather than present detailed proofs, the main ideas are described. A bibliography is provided for those who wish to understand the technical details. One can see that sometimes very simple reasoning (with the right interpretation and tools) can lead in a few lines to very substantial results. The Kolmogorov Legacy in Physics was published by Springer in 2004 (ISBN 978-3-540-20307-0).