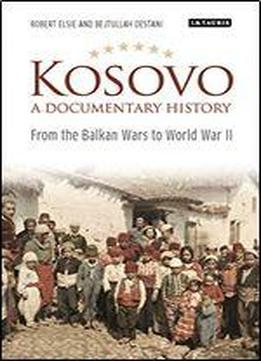 The question of Kosovan sovereignty and independence has a history which stretches far back beyond the outbreak of war in 1998. This volume is a compilation of key documents on Kosovo from the first half of the twentieth century. These texts, including numerous diplomatic despatches from the British Foreign Office, deal initially with the Albanian uprising against Ottoman rule in the spring of 1912 and, in particular, with the period of the Serbian invasion of Kosovo in late 1912 and the repercussions of the conquest for the Albanian population. The documents from 1918 to the early 1920s focus mainly on endeavours by Albanian leaders, including those of the so-called Kosovo Committee in exile, to bring the plight of their people to the attention of the outside world, endeavours which largely failed. Further documents reflect the situation in Kosovo up to the outbreak of World War II. This collection provides new perspectives on the Kosovo question and includes many documents which have been largely unavailable up to now. It sheds new light on many of the major and minor episodes that channelled and determined subsequent events, including the Kosovo War of 1998-1999 and the declaration of independence in February 2008.