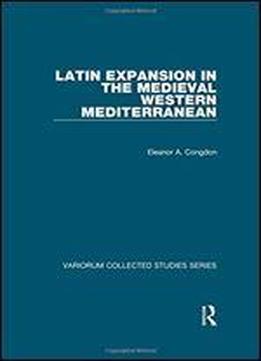 Latin Expansion In The Medieval Western Mediterranean (the Expansion Of Latin Europe, 1000-1500)
by Eleanor A. Congdon / 2013 / English / PDF

While Latin expansion stalled in the Eastern Mediterranean in the late Middle Ages, Islam lost ground to Christendom in the west - in the Spanish Levant, the islands of the Western Mediterranean, and even on the Maghribi coast, where conquerors and colonists from the northern shore of the sea established footholds. Edited by Eleanor Congdon, with an introduction by Felipe Fernndez-Armesto and James Muldoon, this collection of classic studies illuminates the problems of how the expansion occurred and why it was slow and limited. The volume broaches fundamental questions of Mediterranean history formulated by Henri Pirenne and Fernand Braudel. The place of the late medieval Western Mediterranean in the history of the sea as a whole and of European overseas expansion generally emerges with new clarity, as the reader re-traces the process of formation of one of the worlds great frontiers between civilizations. Important work by Maria Teresa Ferrer i Mallol appears in translation for the first time, alongside pieces by such leading authorities as David Abulafia, Robert I. Burns, S.J., Miguel Angel Ladero Quesada, and Hilmar C. Krueger.