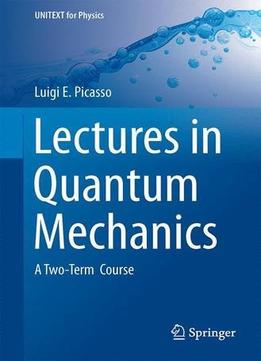 by Luigi E. Picasso (Author) Based on a series of university lectures on nonrelativistic quantum mechanics, this textbook covers a wide range of topics, from the birth of quantum mechanics to the fine-structure levels of heavy atoms. The author sets out from the crisis in classical physics and explores the seminal ideas of Einstein, Bohr, and de Broglie and their vital importance for the development of quantum mechanics. There follows a bottom-up presentation of the postulates of quantum mechanics through real experiments (such as those of neutron interferometry), with consideration of their most important consequences, including applications in the field of atomic physics. A final chapter is devoted to the paradoxes of quantum mechanics, and particularly those aspects that are still open and hotly debated, to end up with a mention to Bell's theorem and Aspect's experiments. In presenting the principles of quantum mechanics in an inductive way, this book has already proved very popular with students in its Italian language version.It complements the exercises and solutions book "Problems in Quantum Mechanics", by E. d'Emilio, L.E. Picasso (Springer). Luigi Picasso is Professor of Theoretical Physics at the University of Pisa, Italy. He currently teaches courses on Studies in Mathematics, Introduction to Quantum Mechanics, and Complements of Physics. Professor Picasso has numerous publications to his name and together with Emilio d’Emilio he co-authored the Springer book "Problems in Quantum Mechanics with Solutions" (2011). 82 illus. Quantum Physics Classical and Quantum Gravitation, Relativity Theory Elementary Particles, Quantum Field Theory Atomic, Molecular, Optical and Plasma Physics