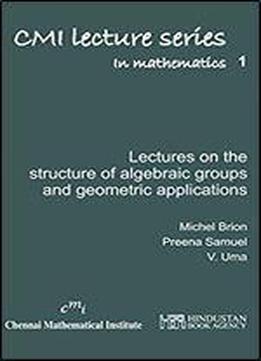 This book originates from a series of 10 lectures given by Professsor Michel Brion at the Chennai Mathematical Institute during January 2011. The book presents a theorem due to Chevalley on the structure of connected algebraic groups, over algebraically closed fields, as the starting point of various other structure results developed in the recent past. Chevalley's structure theorem states that any connected algebraic group over an algebraically closed field is an extension of an abelian variety by a connected affine algebraic group. This theorem forms the foundation for the classification of anti-affine groups which plays a central role in the development of the structure theory of homogeneous bundles over abelian varieties and for the classification of complete homogeneous varieties. All these results are presented in this book. The book begins with an overview of the results exposed, the proofs of which constitute the rest of the book. Various open questions also have been indicated in the course of the exposition. This book assumes certain preliminary knowledge of linear algebraic groups, abelian varieties and algebraic geometry. The book is intended for graduate students and researchers in algebraic geometry.