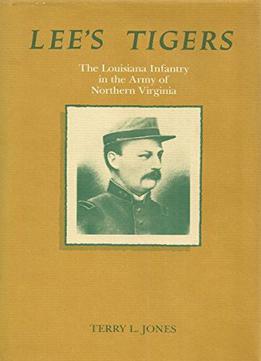 Sometimes called the "wharf rats from New Orleans" and the "lowest scrapings of the Mississippi," Lee's Tigers were the approximately twelve thousand Louisiana infantrymen who served in the Confederate Army of Northern Virginia from the time of the campaign at First Manassas to the final days of the war at Appomattox. Terry L. Jones offers a colorful, highly readable account of this notorious group of soldiers renowned not only for their drunkenness and disorderly behavior in camp but for their bravery in battle. It was this infantry that held back the initial Federal onslaught at First Manassas, made possible General Stonewall Jackson's famed Valley Campaign, contained the Union breakthrough at Spotsylvania's Bloody Angle, and led Lee's last offensive actions at Fort Stedman and Appomattox.Despite all their vices, Lee's Tigers emerged from the Civil War with one of the most respected military records of any group of southern soldiers. According to Jones, the unsavory reputation of the Tigers was well earned, for Louisiana probably had a higher percentage of criminals, drunkards, and deserters in its commands than any other Confederate state. The author spices his narrative with well-chosen anecdotes-among them an account of one of the stormiest train rides in military history. While on their way to Virginia, the enlisted men of Coppens' Battalion uncoupled their officers' car from the rest of the train and proceeded to partake of their favorite beverages. Upon arriving in Montgomery, the battalion embarked upon a drunken spree of harassment, vandalism, and robbery. Meanwhile, having commandeered another locomotive, the officers arrived and sprang from their train with drawn revolvers to put a stop to the disorder. "The charge of the Light Brigade," one witness recalled, "was surpassed by these irate Creoles." Lee's Tigers is the first study to utilize letters, diaries, and muster rolls to provide a detailed account of the origins, enrollments, casualties, and desertion rates of these soldiers. Jones supplies the first major work to focus solely on Louisiana's infantry in Lee's army throughout the course of the war. Civil War buffs and scholars alike will find Lee's Tigers a valuable addition to their libraries.