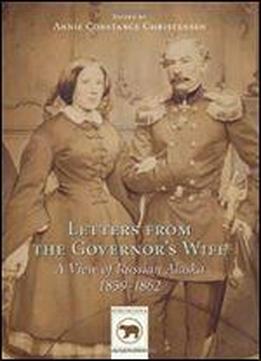 When Johan Furuhjelm was offered the governorship of Russian America in 1858, the 37-year-old Finnish officer found himself in a quandary. He needed a wife to support him in the new post, with its mix of mercantile and administrative responsibilities, and there were no suitable candidates in the remote Siberian port where he was harbourmaster. Fortunately, on his trip back west to receive his orders, Helsinki society came to his aid, choosing for him a young woman of good family and international background, Anna von Schoultz. On their wedding day just one month later, the pair set off by sleigh for St Petersburg and eventually via London, Panama and San Francisco Sitka, where they would remain for the next five years. On the very first day of that journey, Anna wrote the first of a long series of letters to her mother, letters in which she charted her evolving responses to the two new worlds that began to unfold before her: married life and Russian America. These letters make up the present book and provide the reader with a fascinating portrait of private and public life in Alaska shortly before it was sold to the US in 1867, as observed by a woman at a unique intersection of cultures Russian, European and Native American.