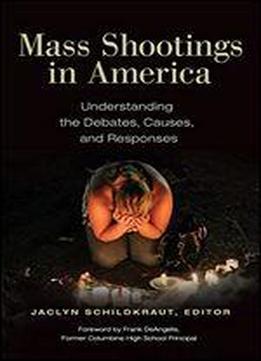 This work examines mass shootings in the United States, focusing on events from 1966 to 2016. In addition to providing essential information about each shooting, it surveys underlying causes of such events and potential reforms to prevent future ones. * Helps readers to understand a controversial topic with overview essays written by subject experts on mass shootings and their underlying causes * Breaks up the tragedy of mass shootings with individual entries on more than 300 that have taken place in the United States since 1966 * Provides perspective on various subjects of debate through contributions from experts and issue advocates * Documents America's response to mass shootings, from the official investigative reports on the Columbine High School shooting to former President Barack Obama's response to the 2012 mass shooting at Sandy Hook Elementary School, through careful selection of primary sources