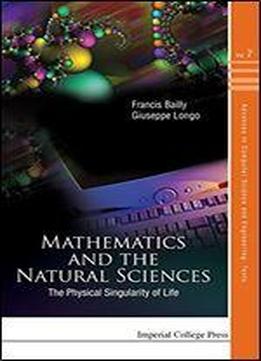 Mathematics And The Natural Sciences: The Physical Singularity Of Life
by Francis Bailly / 2011 / English / PDF

The book aims at the identification of the organising concepts of some physical and biological phenomena, by means of an analysis of the foundations of mathematics and of physics. This is done in the perspective of unifying phenomena, of bringing different conceptual universes into dialog. The analysis of the role of order and of symmetries in the foundations of mathematics is linked to the main invariants and principles, among which the geodesic principle (a consequence of symmetries), which govern and confer unity to the various physical theories. Moreover, we attempt to understand causal structures, a central element of physical intelligibility, in terms of symmetries and their breakings. The importance of the mathematical tool is also highlighted, enabling us to grasp the differences in the models for physics and biology which are proposed by continuous and discrete mathematics, such as computational simulations. A distinction between principles of (conceptual) construction and principles of proofs, both in physics and in mathematics, guides this part of the work.As for biology, being particularly difficult and not as thoroughly examined at a theoretical level, we propose a unification by concepts, an attempt which should always precede mathematisation. This constitutes an outline for unification also basing itself upon the highlighting of conceptual differences, of complex points of passage, of technical irreducibilities of one field to another. Indeed, a monist point of view such as ours should not make us blind: we, the living objects, are surely just big bags of molecules or, at least, this is our main metaphysical assumption. The point though is: which theory can help us to better understand these bags of molecules, as they are, indeed, rather singular, from the physical point of view. Technically, this singularity is expressed by the notion of extended criticality, a notion that logically extends the pointwise critical transitions in physics.