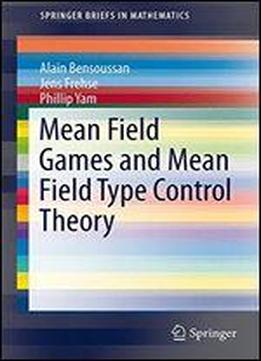 Mean field games and Mean field type control introduce new problems in Control Theory. The terminology games may be confusing. In fact they are control problems, in the sense that one is interested in a single decision maker, whom we can call the representative agent. However, these problems are not standard, since both the evolution of the state and the objective functional is influenced but terms which are not directly related to the state or the control of the decision maker. They are however, indirectly related to him, in the sense that they model a very large community of agents similar to the representative agent. All the agents behave similarly and impact the representative agent. However, because of the large number an aggregation effect takes place. The interesting consequence is that the impact of the community can be modeled by a mean field term, but when this is done, the problem is reduced to a control problem.