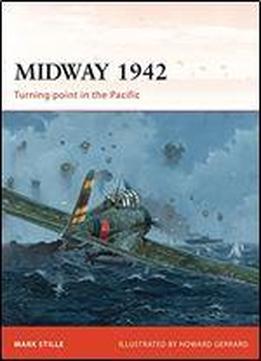 In 1993 Osprey Publishing released the 30th volume in its now legendary Campaign series, entitled, Midway 1942: Turning Point in the Pacific. Now, 17 years later, Osprey brings readers up-to-date with the latest scholarship on this important Pacific War battle of World War II (1939-1945). The new edition clarifies many of the myths of the battle. For example: - the contention that the Americans were outnumbered (overall true, but not where it mattered between the two carrier forces) - that the Aleutians operation was a diversion for the Midway operation - that the sacrifice of the American torpedo bombers was a key to victory - that the battle resulted in high Japanese aircrew losses - that the battle was a victory of superior intelligence - that the battle was the decisive battle of the Pacific War (Guadalcanal was a much more strategically important victory for the Americans) Campaign 226 gives an accurate order of battle for both sides. It provides a detailed description and critique of the Japanese plan and describes how it had a profound influence on the outcome of the battle. It also provides a fresh description and analysis of the weapons, aircrew, and doctrine of the opposing carrier air arms. The new book has a complete set of new pictures which are keyed to the narrative. Osprey's crack cartography team has provided three brand-new 3-D birds-eye-view maps that help readers visualize the air war like never before. And war illustrator, Howard Gerrard, has turned in three stunning new 2-page battle scenes depicting the attack on the USS Yorktown by Hiryu torpedo planes, the attack on Hiryu by American dive-bombers, and the US attack of Japanese heavy cruiser Mikuma.