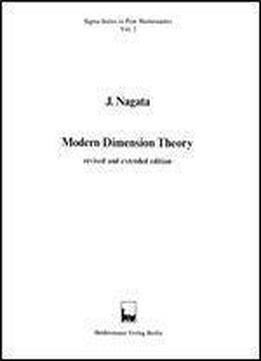 Since the appearance of W. Hurewicz and H. Wallman's book "Dimension Theory" in 1941 there have been remarkable developments in dimension theory, especially in the theory for general metric spaces. Though the purpose of this book is to give a rather brief account of modern dimension theory as it has been developed since 1941, the principal results of the classical theory for separable metric spaces are also included. Presupposing only some elementary mathematical knowledge, especially of topology, we shall begin with a brief description of some necessary results in general topology, emphasizing the modern development. No knowledge of dimension theory is assumed, so that the beginning student will be able to read the book without difficulty. However, to the reader who only wishes to get a quick view of the theory, we recommend Chapters I-IV. The author wishes to express his warmest thanks to Prof. J. de Groot who suggested the writing of this book on this interesting theory and helped him in all respects, to Dr. and Mrs. H, de Vries who carefully read the manuscript, gave suggestions and corrected it, especially in its English expression, and to Profs. M. Atsuji, K. Nagami, Y. Kodama and Prof. H. Tainano who helped him in various respects. Without their valuable assistance, this book would never have been written.