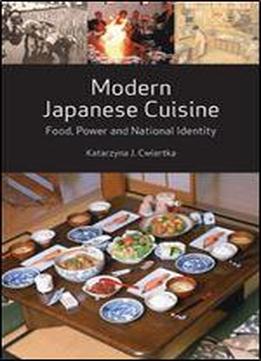 Over the last decade the popularity of Japanese food in the West has increased immeasurably, contributing to the continuing diversification of Western eating habits but Japanese cuisine itself has evolved significantly since pre-modern times. This book explores the origins of Japanese cuisine as we know it today, investigating the transformations and developments food culture in Japan has undergone since the late nineteenth century. Among the key factors in the shift in Japanese eating habits were the dietary effects of imperialism, reforms in military catering and home cooking, wartime food management and the rise of urban gastronomy. Japans patchwork of diverse regional cuisines became homogenized over time and was replaced by a set of foods and practices with which the majority of Japanese today ardently identify. This book demonstrates that Japanese cuisine as it is currently understood and valued, in spite of certain inevitable historical influences, is primarily a modern invention concocted in the midst of the turbulent events of the late nineteenth and the twentieth centuries. Katarzyna J. Cwiertka is a recognized expert on the subject of Japanese cuisine and its modern history, and this book is a result of more than a decade of research. It also includes a section on the spread of Japanese food and restaurants in Western countries. Modern Japanese Cuisinewill be of interest to the general reader interested in Japanese culture and society, as well as to a more specialized audience, such as scholars of Japan, anthropologists and food historians.