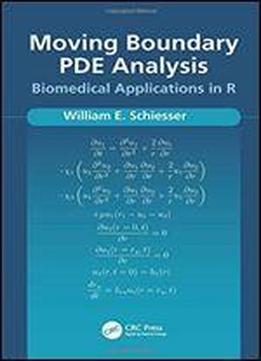 Mathematical models stated as systems of partial differential equations (PDEs) are broadly used in biology, chemistry, physics and medicine (physiology). These models describe the spatial and temporial variations of the problem system dependent variables, such as temperature, chemical and biochemical concentrations and cell densities, as a function of space and time (spatiotemporal distributions). For a complete PDE model, initial conditions (ICs) specifying how the problem system starts and boundary conditions (BCs) specifying how the system is defined at its spatial boundaries, must also be included for a well-posed PDE model. In this book, PDE models are considered for which the physical boundaries move with time. For example, as a tumor grows, its boundary moves outward. In atherosclerosis, the plaque formation on the arterial wall moves inward, thereby restricting blood flow with serious consequences such as stroke and myocardial infarction (heart attack). These two examples are considered as applications of the reported moving boundary PDE (MBPDE) numerical method (algorithm). The method is programmed in a set of documented routines coded in R, a quality, open-source scientific programming system. The routines are provided as a download so that the reader/analyst/researcher can use MFPDE models without having to first study numerical methods and computer programming.