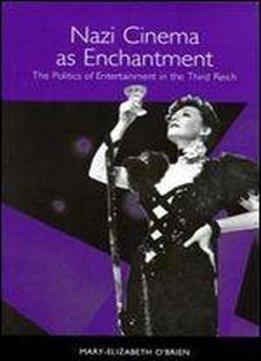 Nazi Cinema As Enchantment: The Politics Of Entertainment In The Third Reich
by Mary-Elizabeth O'Brien / 2004 / English / PDF

The Nazi regime did not merely terrorize its citizens into submission it also seduced them by offering stability, a traditional value system, a sense of belonging, and hope of a better standard of living. Nazi cinema's popularity rested on its ability to express positive social fantasies and promote the enchantment of reality, so that one would want to share in the dream at any price. This is an interdisciplinary study, written for scholars and students in the fields of film studies, German studies, history, critical studies, and political science, that explores how cinema participated in the larger framework of everyday fascism. The book examines how five film genres - the historical musical, the foreign adventure film, the home-front film, the melodrama, and the problem film - enchanted audiences and enacted shared stories that can tell us much about how family, community, history, the nation, and the war were imagined in Nazi Germany. The book analyzes thirteen motion pictures, many of which are not well known to English-speaking audiences: Wunschkonzert, Die groe Liebe, Tanz auf dem Vulkan, Damals, Die Degenhardts, Opfergang, Kautschuk, Robert und Bertram, Verklungene Melodie, Frauen fur Golden Hill, Das Leben kann so schon sein, Der verzauberte Tag, and Via Mala. Based on exhaustive research in German archives, the book examines, in addition to the films themselves, articles from the propaganda ministry's official organ, Der deutsche Film, daily trade sheets, fan magazines, and even studio press packages for individual stars and films. Mary-Elizabeth O'Brien is Professor of German at Skidmore College, Saratoga Springs, New York.