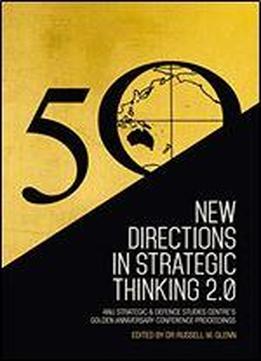 The Australian National Universitys Strategic & Defence Studies Centre (SDSC) is Australias premier university-based strategic studies think tank. Fifty years after the Centre was founded in 1966, SDSC celebrated its continued research, publications, teaching and government advisory role with a two-day conference entitled New Directions in Strategic Thinking 2.0. The event saw the podium graced by many of the worlds premier thinkers in the strategic studies field. An evening between those tours to the lectern brought together academics, practitioners and other honoured guests at a commemorative dinner held beneath the widespread wings of the G for George bomber in the Australian War Memorialan event that included SDSCs own Professor Desmond Ball AO making his last public appearance. Since SDSCs 25th anniversary, the world has seen the collapse of the Soviet Union and the end of the Cold War. Bipolarity gave way to the emergence of the United States as the worlds sole superpower, a status many now see as under threat. Both the nature of the threats and identity of individual competitors has changed in the interim quarter-century. Non-state actors are presenting rising challenges to national governments. Meanwhile, a diminished Russia and far more wealthy China seek to reassert themselves. Never before has the call for reasoned innovative security studies thinking been more pronounced. Rarely has a group so able to offer that thought come together as was the case in July 2016. This book encapsulates the essence of this cutting-edge thinking and is a must read for those concerned with emerging strategic challenges facing Australia and its security partners.