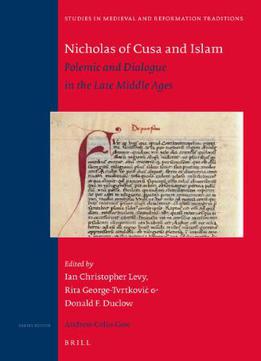 Nicholas Of Cusa And Islam: Polemic And Dialogue In The Late Middle Ages
by Ian Christopher Levy / 2014 / English / PDF

This collection of essays explores the complex relations between Christians and Muslims at the dawn of the modern age. It begins by examining two seminal works by Nicholas of Cusa: De pace fidei, a dialogue seeking peace among world religions written after the conquest of Constantinople in 1453, and Cribratio Alkorani (1460-61), an attempt to confirm Gospel truths through a critical reading of the Qur an. After considering Nicholas, his sources, and his context, the book explores a wider range of late medieval texts on Christian-Muslim relations not only Christian writings about Islam but also Muslim responses to Christianity. The book s focus is historical, but it can also contribute to efforts at increasing Muslim-Christian understanding today."