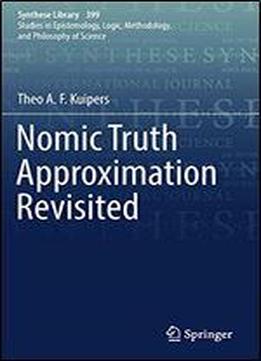 This monograph presents new ideas in nomic truth approximation. It features original and revised papers from a (formal) philosopher of science who has studied the concept for more than 35 years. Over the course of time, the author's initial ideas evolved. He discovered a way to generalize his first theory of nomic truth approximation, viz. by dropping an unnecessarily strong assumption. In particular, he first believed to have to assume that theories were maximally specific in the sense that they did not only exclude certain conceptual possibilities, but also that all non-excluded possibilities were in fact claimed to be nomically possible. Now, he argues that the exclusion claim alone, or for that matter the inclusion claim alone, is sufficient to motivate the formal definition of being closer to the nomic truth. The papers collected here detail this generalized view of nomic truthlikeness or verisimilitude. Besides this, the book presents, in adapted form, the relation with several other topics, such as, domain revision, aesthetic progress, abduction, inference to the best explanation, pragmatic aspects, probabilistic methods, belief revision and epistemological positions, notably constructive realism. Overall, the volume presents profound insight into nomic truth approximation. This idea seeks to determine how one theory can be closer to, or more similar to, the truth about what is nomically, e.g. physically, chemically, biologically, possible than another theory. As a result, it represents the ultimate goal of theory oriented empirical science. Theo Kuipers is the author ofStudies in Inductive Probability and Rational Expectation(1978),From Instrumentalism to Constructive Realism(2000) andStructures in Science(2001). He is the volume-editor of the Handbook onGeneral Philosophy of Science(2007). In 2005 there appeared two volumes of Essays in Debate with Theo Kuipers, entitledConfirmation, Empirical Progress, and Truth ApproximationandCognitive Structures in Scientific Inquiry.