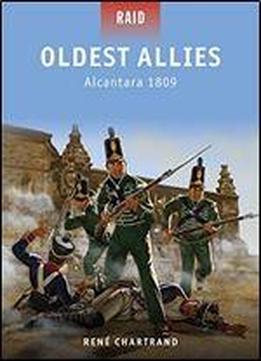 During the war for Spanish independance from Napoleonic France, Portuguese and British troops launched a daring raid into southern Spain, siezing the ancient city of Alcantara. Napoleon had left his brother Joseph as King of Spain with some 300,000 French troops to put down the Spaniards, nearly all of whom had revolted against French rule. At the beginning of 1809, British forces held most of Portugal, while Marshal Soult attacked the north. Porto and most of the upper Douro River basin were taken by the French, but they met with stiff resistance from semi-regular and guerrilla-like Portugese troops led by General Silveira in the northeast. Taking the fight to the French, part of the British-led Loyal Lusitanian Legion, along with various Portuguese troops, raided deep into Spain. Both British and Portuguese leaders (including the warrior-like Bishop of Porto!) initiated raids into Spain. Even as Soult occupied Porto in January 1809, Sir Robert Wilson was further east with part of his green-uniformed Loyal Lusitanian Legion at the fortress of Almeida, having led just a few hundred men into Spain, to be joined by thousands of patriots, and eventually reaching the outskirts of Salamanca. Meanwhile, in Lisbon, command of the British army passed to Wellington. In May 1809, he marched north to liberate Porto while Silveira's levies pressed the French in the northeast. While Wellington and Silveira attacked Porto and northern Portugal, it was important to keep the French occupied elsewhere in Spain, to prevent their huge armies in Spain converging on northern Portugal and assisting Soult. To this end, Marshal Beresford, commanding the reorganized Portuguese Army, detached a large part of his most reliable troops - the British-led Loyal Lusitanian Legion - to raid the Spanish province of Estramadura, far to the south. 1,800 men of the Loyal Lusitanian Legion, along with other Portuguese troops, under the command of Lieutenant Colonel Mayne crossed the mountains into Estarmadura and raided the French border posts. The French soon fled, and the raiders quickly occupied Alcantara (the seat of the Medieval knightly order that bears its name). From here, some raiding parties went further east into Spain to cause as much trouble as possible to attract the attention of the French. This new Raid title will detail all aspects of this compelling clash of forces.