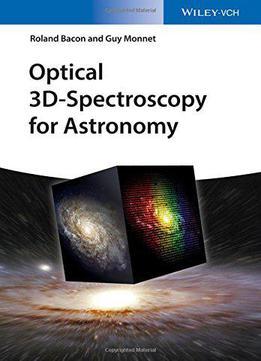 Over the last 50 years, a variety of techniques have been developed to add a third dimension to regular imaging, with an extended spectrum associated to every imaging pixel. Dubbed 3D spectroscopy from its data format, it is now widely used in the astrophysical domain, but also inter alia for atmospheric sciences and remote sensing purposes. This is the first book to comprehensively tackle these new capabilities. It starts with the fundamentals of spectroscopic instruments, in particular their potentials and limits. It then reviews the various known 3D techniques, with particular emphasis on pinpointing their different `ecological? niches. Putative users are finally led through the whole observing process, from observation planning to the extensive ? and crucial - phase of data reduction. This book overall goal is to give the non-specialist enough hands-on knowledge to learn fast how to properly use and produce meaningful data when using such a 3D capability. is astrophysicist, directeur de recherche au CNRS and former director of the Lyon Observatory (1994-2004). He has played a pioneering role in the development of integral field spectroscopy as leader of 4 major and innovative instruments for ground based telescope: TIGER and OASIS at the 3.6m Canada France Hawaii telescope, SAURON at the 4.2m William Herschel telescope and MUSE at the 8m ESO Very Large Telescope. His main research field is extragalactic astronomy. He is the owner since 2014 of an advanced grant from the European Research Commission. is an astrophysicist, with 50-year experience of developing astronomical instrumentation, on the ground and in space, mostly with a 3D spectroscopic flavor. Successively, he was director of the Marseilles Observatory, Lyon Observatory and the Canada France Hawaii Telescope Corporation. He then took the position of Head of Instrumentation at the European Southern Observatory (1995-2009) and the Australian Astrophysical Observatory (2010-2011). His main scientific domain is the dynamics of stars and ionized gas in galaxies.