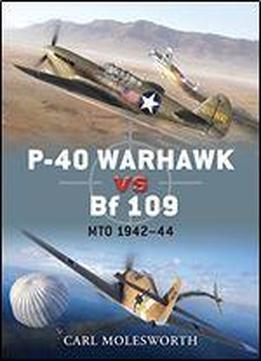 Although the P-40 and the Bf 109 both joined the air war over North Africa at nearly the same time in early 1941, the venerable German fighter was already fully sorted with a combat career dating back to 1937 in Spain, while the American fighter was making its combat debut in the hands of the RAF's Desert Air Force. Both aircraft were low-wing designs powered by a single liquid-cooled engine of roughly the same output, but there the similarities ended. The Bf 109 was small and agile, capable of operating at high altitudes. The P-40's weight and engine limited it to middle-altitude operations, but it was more manoeuvrable than the Bf 109 and extremely capable in the fighter-bomber role. In typical encounters, Bf 109 pilots would climb above a formation of P-40s and then dive into battle, seeking to maintain the initiative and a speed advantage. The P-40 pilots would respond by trying to turn into the attack. The tide turned in the autumn of 1942, by which time USAAF P-40 squadrons had joined the fight in time for the final Allied push from El Alamein and the Operation Torch landings in Morocco.