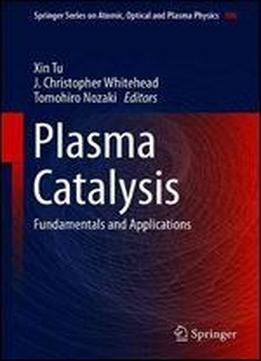 This book provides a comprehensive overview of the field of plasma catalysis, regarded as a promising alternative to thermal processes for energy and environmental applications. It bridges the gap between the plasma and catalysis research communities, covering both the fundamentals of plasma catalysis and its application in environmental and energy research. The first section of the book offers a broad introduction to plasma catalysis, covering plasma-catalyst systems, interactions, and modeling. The core of the book then focuses on different applications, describing a wide range of plasma-catalytic processes in catalyst synthesis, environmental clean-up, greenhouse gas conversion and synthesis of materials for energy applications. Chapters cover topics ranging from removal of NOx and VOCs to conversion of methane, carbon dioxide and the reforming of ethanol and methanol. Written by a group of world-leading researchers active in the field, the book forms a valuable resource for scientists, engineers and students with different research backgrounds including plasma physics, plasma chemistry, catalysis, energy, environmental engineering, electrical engineering and material engineering.