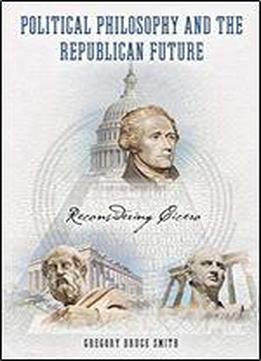 Are we moving inevitably into an irreversible era of postnationalism and globalism? In Political Philosophy and the Republican Future, Gregory Bruce Smith asks, if participation in self-government is not central to citizens' vision of the political good, is despotism inevitable? Smith's study evolves around reconciling the early republican tradition in Greece and Rome as set out by authors such as Aristotle and Cicero, and a more recent tradition shaped by thinkers such as Machiavelli, Locke, Montesquieu, Adam Smith, Madison, and Rousseau. Gregory Smith adds a further layer of complexity by analyzing how the republican and the larger philosophical tradition have been called into question by the critiques of Nietzsche, Heidegger, and their various followers. For Smith, the republican future rests on the future of the tradition of political philosophy. In this book he explores the nature of political philosophy and the assumptions under which that tradition can be an ongoing tradition rather than one that is finished. He concludes that political philosophy must recover its phenomenological roots and attempt to transcend the self-legislating constructivism of modern philosophy. Forgetting our past traditions, he asserts, will only lead to despotism, the true enemy of all permutations of republicanism. Cicero's thought is presented as a classic example of the phenomenological approach to political philosophy. A return to the architectonic understanding of political philosophy exemplified by Cicero is, Smith argues, the key to the republican future.