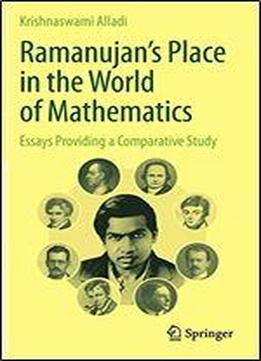 This book is a collection of articles, all by the author, on the Indian mathematical genius Srinivasa Ramanujan as well as on some of the greatest mathematicians throughout the history whose life and works have things in common with Ramanujan. It presents a unique comparative study of Ramanujans spectacular discoveries and remarkable life and of the monumental contributions of various mathematical luminaries, some of whom, like Ramanujan, overcame great difficulties in life. In the book, some aspects of Ramanujans contributions, such as his remarkable formulae for the number pi, his pathbreaking work in the theory of partitions, and his fundamental observations on quadratic forms, are discussed. Finally, the book describes various current efforts to ensure that the legacy of Ramanujan will be preserved and continue to thrive in the future. Thus the book is an enlightening study of Ramanujan as a mathematician and a human being.