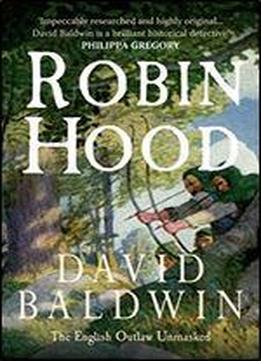 Everyone has heard of Robin Hood, the brilliant archer who ‘robbed the rich to give to the poor’ and who always triumphed over the forces of evil, but the man behind the legend is as mysterious as King Arthur. There were outlaws who lived in the royal forests preying on unwary travelers, and Robin Hoods whose names are recorded in historical documents: but no one has been able to prove that one of these real Robins was the individual whose exploits were commemorated in ballad and song. David Baldwin sets out to find the real Robin Hood, looking for clues in the earliest ballads and in official and legal documents of the thirteenth and fourteenth centuries. His search takes him to the troubled reign of King Henry III, and to Henry’s difficult and deteriorating relationship with his brother-in-law Simon de Montfort, Earl of Leicester. Earl Simon became a popular hero, a man who, it was thought, might have changed everything for the better, and who was credited with miracles in the aftermath of his death at the battle of Evesham. Supporters who continued to oppose the government inherited his mantle, and one of them, a man named Roger Godberd who retreated to the forest and defied the sheriff, won notoriety and respect in equal measure. Later generations added much to the story, but Godberd, Baldwin argues, is the original outlaw hero. The reason why the real Robin Hood is inexplicably missing from contemporary records is that he was not called Robin Hood in his own day.