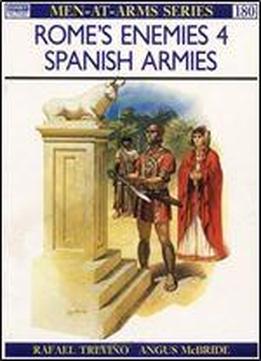 The Republican Roman army suffered heavy losses as a result of the 'hit and run' tactics employed by the Hispanics in Ancient Spain. After preparatory chanting, the Celt-Iberians would attack en masse and in apparent disorder. At a pre-arranged signal the warriors would retreat as if defeated. This sequence might be repeated over several days, until finally the Romans lost their discipline and broke formation in pursuit. At this point the Hispanics would quickly mount a counter-attack that would decimate the legions. This volume explores the organisation, tactics, history, arms and armour of Rome's Spanish enemies.